heathlands along the Klondike Trail near Cable John Cove

It’s true that I went to Newfoundland just to take pictures of puffins, but of course I couldn’t resist taking a few wildflower pictures, too.

Newfoundland is complicated, climactically speaking, and as a result the flora is complicated, too, with some (primarily Atlantic Coastal Plain species) occurring at the extreme northern edge of their range and others (subarctic and arctic species) at the southern edge of their range. The island is in the boreal forest region, with balsam fir (Abies balsamea) predominating, and has many heathlands and bogs.

The rose and heath families (Rosaceae and Ericaceae) are well represented, as is the aster family (Asteraceae), of course.

The Klondike Trail starts at Elliston, near the northern end of the Bonavista Peninsula, passing through boreal forest and a bog or two until it gets to the heathlands near Cable John Cove. 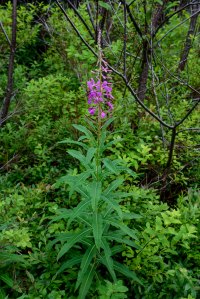 Fireweed (Chamerion angustifolium, Onagraceae; aka Chamaenerion angustifolium and formerly Epilobium angustifolium, depending on the source) was the first flower I saw on the Klondike, but to be fair this plant is just about everywhere, including roadsides all through Newfoundland. It’s a circumpolar species with a confusing taxonomy. In the US it’s found in the northernmost states, southward along the Appalachians, and in the mountainous West. 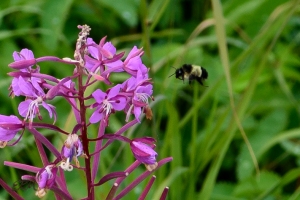 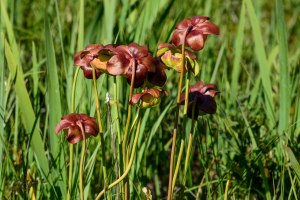 Heading northwest from Elliston, the Klondike Trail quickly comes to a bog, where I saw lots of northern pitcher plants (Sarracenia purpurea; Sarraceniaceae). This strikingly showy carnivorous plant, the provincial flower of Newfoundland and Labrador, is found in most of Canada, and in the US from Minnesota east to Maine, south along the Atlantic and the Gulf of Mexico coasts, with a few populations in the West.

And guess what was growing in the bog along with the pitcher plants? That’s right: Iris versicolor (northern blue flag; Iridaceae). I’ve written enough about that species this year, so onward… 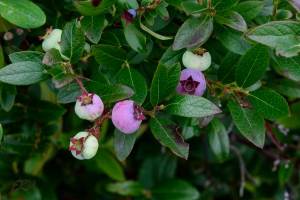 Foraging for berries is a popular pastime in this area. There are blueberries (Vaccinium angustifolium, I think; Ericaceae) and raspberries (Rubus idaeus; Rosaceae) growing right along the trail. 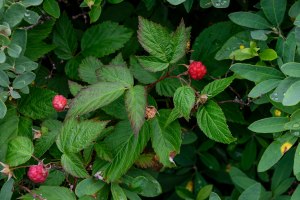 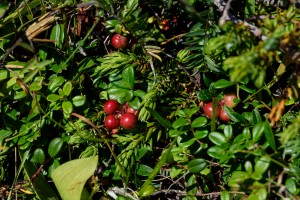 Further along in the heathlands I saw a family gathering redberry, aka partridgeberry, aka lingonberry (Vaccinium vitis-idaea). 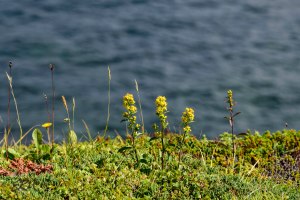 The Bonavista peninsula is the windiest place in Newfoundland, and it showed in the stunted plants of the heaths along the headlands. I believe this goldenrod is Solidago hispida, but goldenrod identification is tricky when you’re working from photos, so I could be wrong. 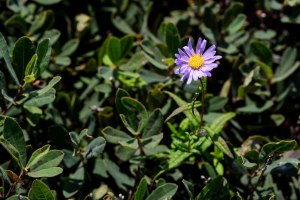 Virginia rose (Rosa virginiana) is found in Virginia, but despite the specific epithet it’s more common to the north, ranging through New England into Canada.

Meadowsweet (Spiraea alba var. latifolia, formerly Spiraea latifolia; Rosaceae) is found in the Mid-Atlantic mostly in the Appalachians, but is more common north into New England and Canada.

This spectacular flower is harebell (Campanula rotundifolia; Campanulaceae), found in mountainous areas and northern areas in the US, mostly in New England and the upper Mid-West, and is all over the place in Newfoundland. In Maryland it’s listed S2 (state rare).