Like rock polypody, alumroot grows right out of rocks, or rocky areas with thin soils.  Cultivars of Heuchera species are common in the nursery trade; look for them under the common name “coral bells”.  They make for nice texture in a shade garden, or as a groundcover near trees (if tree roots don’t out-compete them), though they won’t tolerate foot traffic.

This not-so-good photo is of the exact same plant shown above, taken in early June 2014.  Note the Virginia creeper (Parthenocissus quinquefolia) cascading around it. 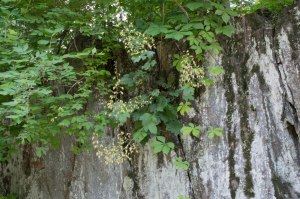