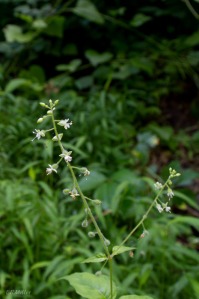 Standing one to three feet tall, this woodland forb has tiny, white, two-petaled flowers. The petals are so deeply cleft that you’d think there are four.

Enchanter’s nightshade’s native range is from the Great Plains east to the Atlantic, north into Canada, and all the way south (except Florida).

The USDA Plants database shows two other species of Circaea in North America; one (C. alpina) is a much shorter plant found throughout much of the US (not the southern Mid-West or deep South) that is endangered or extirpated in several states; the other (C. x intermedia) is a naturally-occurring cross between C. lutetiana and C. alpina.

I spent awhile surfing the internet looking for some interesting facts or trivia about this plant, and came up with nothing, other than confirmation of my observation that summer-flowering woodland plants tend to have very small white flowers.  Enchanter’s nightshade isn’t going to knock your socks off with its beauty, unless you pause long enough to get a good, close look at the flowers. 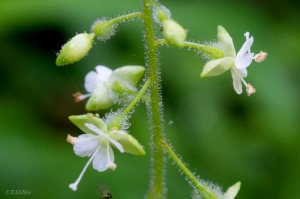 I actually do find it enchanting.

ps – look closely at the upper sepal in the top photo; see the aphids?