There are places within my regular hunting grounds where I’m reluctant to go.  Down rock scrambles that were easier before my knees got bad, before I started schlepping around a daypack stuffed with photography equipment… areas covered in poison ivy, part-time islands…  But the effort can be rewarding (see my recent post about blue false indigo).  So it was last week when I went to check on culver’s root (still there, not yet blooming).  Slick wet rocks, poison ivy everywhere, some invasive aliens, nothing terribly interesting… hey, what’s this?

This is climbing dogbane, a low-growing vine of the southeastern US that is rare in Illinois and endangered in Maryland.  Not only endangered, but listed by the Maryland Department of Natural Resources as S1, which is defined:

“Critically imperiled in Maryland because of extreme rarity (typically 5 or fewer estimated occurrences or very few remaining individuals or acres in the State) or because of some factor(s) making it especially vulnerable to extirpation. Species with this rank are actively tracked by the Wildlife and Heritage Service.”

There’s not a lot to say about it.  It isn’t particularly beautiful.  There’s almost no useful or interesting information on the internet about it, except at carolinanature.com.  It isn’t in any of my books; someone in an internet plant group identified it for me.

And I don’t have very good pictures, because I slipped on wet rocks climbing down there, my knees were aching, I was precariously balanced on more wet rocks with no place to set the tripod, and oh, guess what the climbing dogbane was climbing on? 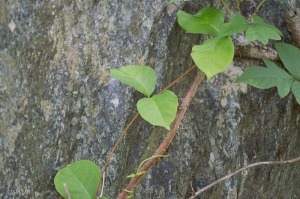 Nonetheless, I am going back there in a few days to try to locate it again.  This time I’ll geotag it and report the find to the DNR.

1 thought on “Flower of the Day: Climbing Dogbane”