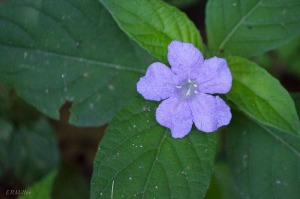 Actually Ruellia and Petunia are quite far apart taxonomically; not only are they in different families,  they’re in different orders (Scrophulariales and Solanales, respectively).

About 15 species of Ruellia can be found in the continental US; of these, four are found in Maryland, and of those four, this is the only one you’re likely to see. The other three are critically imperiled here. 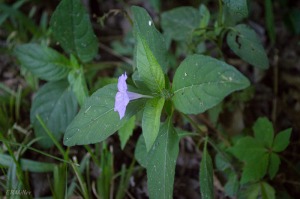 R. caroliniensis ranges from New Jersey (where it’s endangered) west to Illinois, and then south to the Gulf coast.  It grows one to three feet tall.  I’ve seen references to it liking both dry, sandy soils and moist soils; the three places in the Gorge where I know to find it have sandy soils that are prone to minor flooding, so I’m not sure what to make of that.

See the partly submerged rock on the lower right?  Yeah, that’s one of the places where this plant grows.

1 thought on “Flower of the Day: Hairy Wild Petunia”