Remember the post about bees and bee mimics?  Last weekend I went on a group hike to Snyder’s Landing, on the Potomac River near Sharpsburg, MD.  We were hunting for ferns, but that didn’t keep me from photographing flowers and insects.

Not much is blooming at this time of year.  We saw some basil balm, some pale touch-me-not, and a small stand of garden phlox.

Garden phlox is native to the eastern US (and parts of the West), but is the foundation species for hundreds of cultivars.  The one pictured may be the species, or it may be a cultivar escaped from cultivation – I have no way to tell. 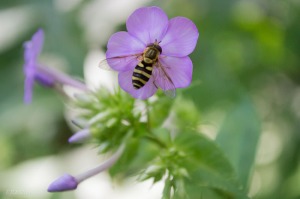 Yes, that’s a bee mimic – in the order Diptera (flies).  Only two wings and very stubby antennae.  I believe it’s a hoverfly, family Syrphidae, though of course I could be wrong.  At any rate, I was tickled to have finally seen a bee mimic!