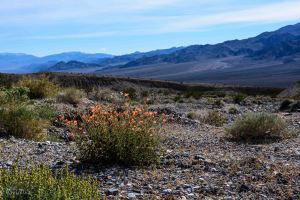 Heading north on Scotty’s Castle Road in not-as-desolate-as-it-appears Death Valley, I spied a big ball of apricot. Apricot?! I’d seen many yellow flowers, and white, and purple and blue and pink, and even some orange dodder looking like balls of Silly String, but this was completely different. Knowing that no cars were behind (good situational awareness), I was able to brake pretty aggressively and have another look before rounding a corner. Half a mile later there was a turnout wide enough to allow a safe u-turn*, then back I went to have a close look at this: 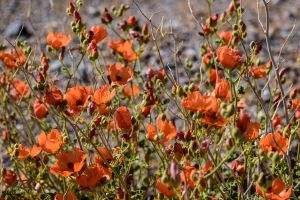 It’s globemallow, aka desert mallow (Sphaeralcea ambigua, Malvaceae), a perennial forb that can grow to three feet tall and three feet wide. When winters are wet, it puts forth an exceptional display. It’s found in California, Nevada, Utah, and Arizona. I’d love to have one in my garden, but the mid-Atlantic is just too wet for a xerophyte like this.

Once stopped at this site, I got my camera bag and water bottles and set off exploring the nearby wash and a mini-butte, where I found plenty of belly flowers and two nifty cacti, neither of which were flowering. More on these another time. This is the only specimen of globemallow I saw on the entire trip. 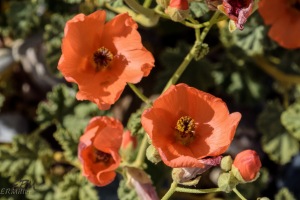