The state of Maryland is home to more than 50 species of native orchids. Until this past weekend, I have seen only three of those in bloom (and the leaves of a fourth).

I was going a little crazy trying to find any of the three species of lady’s slippers in Maryland. After hours of searching on Sugarloaf Mountain I found a plant, I think, but it wasn’t flowering. I might have seen several plants in Rachel Carson Conservation Park, but can’t be sure until they flower. 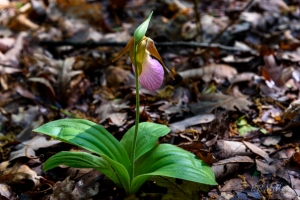 Then a very kind member of the Maryland Native Plant Society came to my rescue. The instructions were explicit and excellent, and I was able to spot eleven plants in a somewhat spread out area. Three of them were in bloom.

It helps to be looking in the right places, of course. Interestingly, pink lady’s slipper grows in several different habitats. I’ve seen references to it growing in dry woods and moist woods, on slopes and in bogs, in hardwood forests and mixed deciduous-coniferous woods.

Like most orchids, this plant depends on a symbiotic relationship with a species of soil fungus in order to reproduce and grow. For this reason (among others, like its very large root system), attempts to transplant it from the wild are doomed to fail.

Pink lady’s slipper ranges from the upper Midwest into New England, then south into Virginia and a little further south along the Appalachian Mountains. It can be found all over Maryland, though there are no records for it in four counties per the Maryland Biodiversity Project. It’s endangered in Illinois; exploitably vulnerable in New York; commercially exploited, endangered in Tennessee; and unusual in Georgia.

An now, a confession: I actually find this flower rather ugly. That doesn’t change how happy I am to have finally seen it in the wild.