After finding table mountain pine (Pinus pungens) on Sugarloaf Mountain earlier this year, I did a little research on how to identify pines, intending to write a post about it. And since the Maryland Native Plant Society designated 2016 The Year of the Conifer, I of course checked their website, where I found a key, which was great except now it seemed pointless to write the post.

Anyway, there are two other species of pine that I see fairly often on Sugarloaf (and other natural areas in the Maryland Piedmont): white pine and scrub pine.

White pine is familiar to many people as a popular landscape tree. In the right conditions is grows fast, straight and true, providing shade, privacy, and a pleasing light green fluffy backdrop. Unfortunately it is also susceptible to “white pine decline”, a mostly abiotic problem but this isn’t a gardening blog so I’ll just provide a link.

Eastern white pine is found in the eastern half of the US and Canada, except for the Deep South, and is listed as rare in Indiana. Specimens found in the woods of course won’t be as stately as the ones in landscape gardens, but it’s still a nice find.

According to the Maryland Biodiversity Project, this tree is native only to the westernmost part of the state, but is naturalized and can found throughout most of Maryland except parts of the Coastal Plain.

It’s fairly easy to identify, as it is the only pine in this area to have needles growing in bundles of five. They tend to be several inches long, soft, and a light gray-green.

As beloved as white pine is in the landscape, scrub pine is not. I’ve never met a landscaper or gardener who would consider using one. But there were several at my former house, and I just loved them. I had a hammock slung between a scrub pine and a black gum, and would lie in it quietly, watching the black-capped chickadees crawling up and down the trunk of the pine. Scrub pines grow crooked and the branches and needles are sparse, but they add interesting texture to a manicured landscape. Scrub pine is found from New York (where it’s endangered) in the north to Georgia in the south and as far west as Missouri. It has shorter, darker needles than white pine, and they’re found in bundles of two. 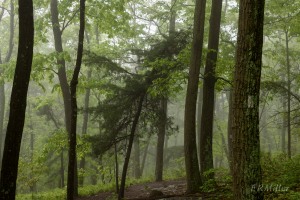