The Rosaceae seems to be well represented in Iceland. Exactly how well I can’t say. There are about 470 species of flowering plants there, but my attempts at finding lists by family were frustrated by my inability to read Icelandic and by the limitations of google translate. I did actually find a list of species names, but not grouped by family, and I just can’t devote the time to looking up each genus to see what family it’s in.

Anyway, I found seven species of Rosaceae blooming, which I’ll post about over the next few days. 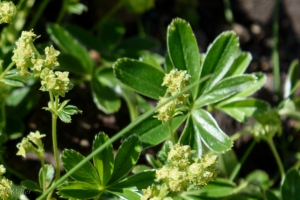 These two species have very similar if not identical flowers, but they can be distinguished by the leaves: clustered lady’s mantle is lobed, and the lobes are toothed all along the margins, while alpine lady’s mantle is compound, with 5 to 7 distinct leaflets that are toothed only near the tips.

A. alpina is native to northern Europe (including Iceland) and North America, where it’s found only in Newfoundland and Labrador, and Greenland. In Iceland it’s found almost everywhere except at the highest elevations.

A. glomerulans is also a northern European species. It has a similar range to A. alpina in North America, except that it’s also found in Quebec. In Iceland it has a smaller range, being absent from the southern coastal areas and drier parts of the highlands.

Five or six other Alchemilla species are found in Iceland, including A. mollis, introduced to both Iceland and North America as an ornamental (it’s a southern European species). According to the Maryland Biodiversity Project, there are no Alchemillas found as wildflowers in Maryland. 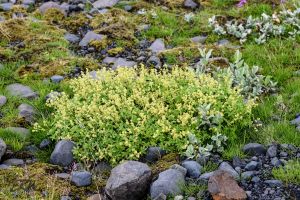