As far as I can tell, seven species of orchid grow in Iceland. I was lucky enough to spot three of them. Here are the other two. 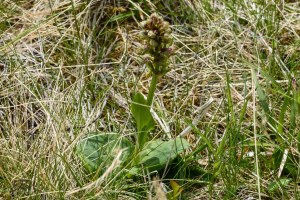 What a delight to find this particular species, native not only to Iceland but also North America (as far south as North Carolina in the Appalachians and New Mexico in the Rocky Mountains) and northern Asia. In Iceland it’s fairly widespread, growing in heathlands and other rich soil areas at mid elevations. I’ve seen it once before, in Catoctin Mountain Park, a rare find since it’s listed S1/Endangered in Maryland, but it wasn’t blooming then.

Sorry I don’t have better pictures. Guess I’ll have to go back next year and do better.