Volunteer commitments and other activities have kept me away from my beloved Potomac gorge for an unprecedented two weeks, but I finally got a chance to go for a quick look around Carderock on Tuesday. I was hoping to find (among other things), starry campion, since I mentioned it in a post about pinks in Iceland a few weeks ago.

I knew exactly where to look, and sure enough, there it was.

Starry campion (Silene stellata, Caryophyllaceae), also known as starry catchfly, whorled catchfly, and widowsfrill, is one of four species of Silene found in the area. (Another is S. caroliniana.) It likes part shade in dry soils, and can be found from the east coast west into the Great Plains. It’s threatened in Michigan, special concern in Connecticut, and historical in Rhode Island.

This species is a perennial, standing about two feet tall,  and consists of a single stem (usually) with leaves in whorls of four (picture here) and a few terminal flowers.

The flowers are white, sometimes with a very faint bluish or purplish tinge. 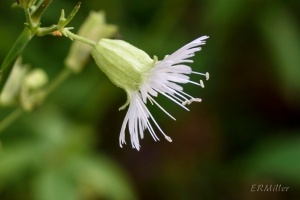 The petals are really neat, aren’t they? Each flower has five petals that are so deeply dissected that from a distance they appear to be many more. If the plants receive too much sunlight, the flowers will close, then reopen in the evening and stay open until bright sunlight the next day.

I found a few other species blooming Tuesday. More about those in the next few days.

2 thoughts on “Back in the Gorge”