And now back to my finds in Serpentine Barrens Conservation Park. 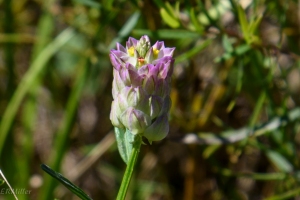 This intriguing small annual grows in moist to dry soils in sunny or partly shady sites. It’s often unbranched, with slender leaves and a tight raceme of flowers that is so dense it appears at first to be a single flower.

In Maryland purple milkwort is found in parts of the Coastal Plain, Piedmont, and Appalachian Plateau. It’s also fairly widespread in eastern North America, occurring in Quebec and Ontario, New England, the mid-Atlantic, the midwest, some parts of the deep South, and into the eastern parts of the Great Plains. There are no conservation issues. 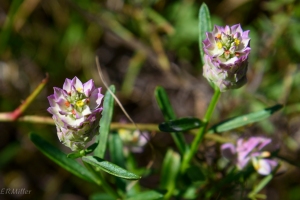 There are about three dozen species of Polygala in various parts of the US, most with rather limited ranges.  P. sanguinea is one of the most widespread. Thirteen of these species are in Maryland, most of them in the coastal plain.

The genus name Polygala is from two Greek words meaning “many” and “milk” – there was a belief that cows grazing on pasture with Polygala species would produce more milk. Probably that’s the reason for the common name “milkwort”, too. (“Wort” is a Middle English word meaning “plant”.) The specific epithet sanguinea is a reference to blood, but I’m not sure why; possibly because of the color of the flowers?

1 thought on “Got Milkwort?”