As beggarticks go this one is rather showy. I found vast stands in Serpentine Barrens Conservation Park late last month, but wasn’t sure which of the many Bidens species they were. How to tell? First, I considered species known to be found in Maryland, then eliminated many choices based on flower form (many are small and/or non-showy). Next, I looked closely at the leaves. Only a few Bidens species have pinnate leaves with very narrow leaflets. But once I narrowed it down to these species, I ran into a problem.

According to one paper referenced by Wikipedia, “the taxonomy of Bidens has been described as ‘chaotic’.”  So I made a little chart to try to sort it out, and narrowed the choices to

Since searches for B. coronata mostly led to B. trichosperma, I ruled out the former as a defunct name, no longer used by most authorities.

ITIS has been my go-to, though I recently learned of the existence of a soon-to-be published flora of Maryland, which is MBP’s standard. Since the remaining three species are recognized by both these authorities, I focused on them.  And the New England Wild Flower Society’s excellent gobotany website came to the rescue.

Identifying species in the Asteraceae often comes down to close examination of the seeds, which these plants weren’t producing yet. But there were enough other details that I could finally name this specimen B. polylepis, based on these characteristics:

Or, to put it in plainer language: 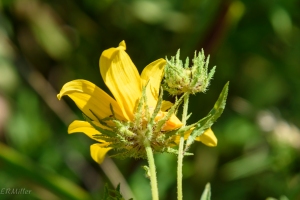 In Maryland, Bidens polylepis can be found mostly in the Coastal Plain and the southern Piedmont. It likes moisture and sun, often in disturbed areas, like clear-cut areas under power lines. The plants can grow up to four feet tall. The main stem may branch, and each branch may have one to three flower heads.

I write this blog for the fun of teaching myself botany and taxonomy (and to share pretty pictures and “gee isn’t this neat” discoveries), so I’m not an expert (yet). Please leave a comment if you believe I’ve gotten something wrong!

The abbreviations used above refer to

(links are to each site’s Bidens page).

Glossary
bract   a modified leaf located under a flower (like the “flowers” of poinsettias or common dogwood)
ciliate   having hairs on the margins (eciliate  without hairs on the margins)
glabrous  smooth
involucre   the part of the plant surrounding or supporting a head of flowers
peduncle   the part of a stem supporting a flower head; flower stalk
pinnate   describes a compound leaf with leaflets on either side of a midrib (actually rachis, but really how detailed should I get here?)
pubescent   downy