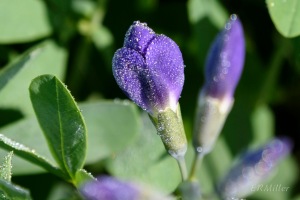 According to the Biota of North America Project, the pea family is second only to the aster family in number of native species in North America, with 1,277 species. Worldwide it’s the third largest plant family, with about 18,800 species in over 600 genera.

The Maryland Biodiversity Project has 161 listed pea family species, though many are alien. Not quite half of these species are present in the Maryland piedmont.

The plants can be herbaceous (annual, biennial, or perennial) or woody. Most of the North American species share these characteristics (as always, there are exceptions):

There are three generally recognized subfamilies of the Fabaceae: Faboideae, Caesalpinoideae, and Mimosoideae. Faboideae flowers share the following characteristics:

These flowers have their own terminology: the uppermost petal is the banner, the two side petals are the wings, and the two bottom petals, fused together, are the keel.

Flowers in the Caesalpinoideae are much the same, except that the two bottom petals (keels) are not fused.

Fabaceous fruits are usually either legumes or loments. Botanically, a legume is a type of dry fruit that usually opens along two seams at maturity (like peapods). A loment is a legume with a jointed pod.

Of course this family is of major agricultural importance. Fabaceous foods include peas, beans, peanuts, lentils, soybeans, and tamarind. Alfalfa and clover, among others, are significant forage crops, for honey bees as well as our domesticated herbivores. And just as the euphorbs have latex, some fabs have natural gums, widely used in food manufacturing, cosmetics, and pharmaceuticals.