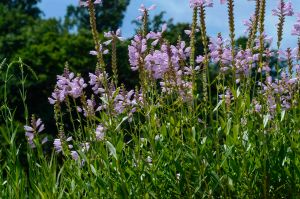 Physostegia virginiana
obedient plant, false dragonhead
Although obedient plant has a large range in the eastern US and Canada, there are only a few scattered occurrences in Maryland, including Montgomery County. I found these stands among the bedrock outcroppings in the Potomac River upstream of Fletcher’s Boathouse in DC. Obedient plant is a perennial that grows to about four feet tall, with late-summer blooming flowers on tall spikes. If it has plenty of soil moisture it can become aggressive, otherwise it makes a great garden plant that attracts bees, butterflies, and hummingbirds. 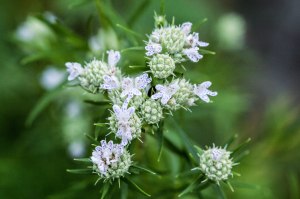 Pycnanthemum tenuifolium
narrow-leaf mountain mint, slender mountain mint
This perennial species grows to three feet tall in rocky areas and drier soils, like the rock outcroppings just upstream of the Marsden Tract. In Maryland it’s found throughout the piedmont and most of the coastal plain; its larger range is from eastern Texas to Quebec. Flowers are borne in terminal cymes.

Salvia lyrata
lyre leaf sage
Like obedient plant, lyre-leaf sage is a native perennial that does well in the garden, growing to about two feet tall, with flowers borne in cymes on the upper part of the stem. It’s related to kitchen sage (same genus) but is not particularly fragrant. It grows in moist soils in full sunlight in every county in Maryland; its greater range is from Texas to New York, where it’s endangered.

Scutellaria elliptica
hairy skullcap
Hairy skullcap is a perennial that grows in drier woodlands; look for stands of it near Carderock and the Marsden Tract (C&O Canal NHP) in early to mid June, when the flowers on terminal racemes start opening. The species ranges from Texas through Pennsylvania, and is found in most of Maryland. 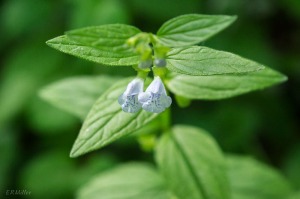 Scutellaria nervosa
veiny skullcap
When I was still fairly new to this hobby I found a few of these plants near the Marsden Tract. After a little while trying to shoot them with a macro lens, I went home to identify them. I was surprised and pleased to learn that I’d found an endangered species (S1, highly state rare), but sadly I have never seen the plants since, despite hours looking every May and June. Veiny skullcap is a low-growing perennial, presumably liking rich, moist woodlands, since that’s where I found it. Flowers are borne singly or in pairs in the axils of upper stem leaves.

Teucrium canadense
American or Canadian germander
This widespread perennial is found in all of the lower 48 states and most of sub-arctic Canada, and is considered weedy by some authorities. It grows to about three feet tall, with flowers borne on terminal racemes. It’s in the same genus as the germander used in herb gardens, but has a much looser habit and likes much wetter soils. In the Potomac gorge I find it right on the floodplain, often in large colonies, particularly in late summer when the river is low.

Trichostema dichotomum
blue curls, forked blue curls, bastard pennyroyal
This annual species is widespread in the eastern US and Canada; in Maryland it’s found throughout the piedmont, coastal plain, and ridge and valley physiographic provinces. Look for it growing in drier soils in sunny areas. I’ve seen it by the dozens in Serpentine Barrens Conservation Park in Montgomery County, blooming in late summer. The plant grows to about two feet tall, with flowers borne in axillary cymes.