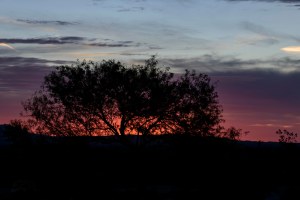 Defining the word “desert” is not as straightforward as it may seem. Colloquially, desert usually means a hot, dry area, or sometimes a cold, dry area, without much vegetation or animal life. Technically, experts don’t agree. According to the US Geological Survey, “There are almost as many definitions of deserts and classification systems as there are deserts in the world.”

A useful definition of desert is: an area that receives 25 cm or less of precipitation annually.

Experts don’t agree on the boundaries and names of the North American deserts, either, but various sources state that there are many minor deserts and four major ones: the Great Basin, Chihuahuan, Mojave, and Sonoran. The Great Basin is the most northerly of these, bounded by the Columbia Plateau, Sierra Nevada Mountains, and Rocky Mountains; geopolitically, this means southeastern Idaho, most of Nevada, western Utah, and east-central California. The Chihuahuan is the most southerly, ranging from southeastern Arizona, southern New Mexico, and west Texas south into Mexico.

The Mojave is a transition from the Great Basin to the Sonoran, and comprises the greater Death Valley area, extreme southern Nevada, a bit of northwestern Arizona, and a tiny smidgen of southwestern Utah. One of the defining features of the Mojave is the flora, as it contains about 200 endemic species. (Look in the March and April 2016 archives for lots of posts about Mojave Desert wildflowers.)

The Sonoran is where Anza-Borrego is. Actually, Anza-Borrego forms the western boundary; from there it spreads east into Arizona and south into Mexico. Although Death Valley in the Mojave boasts the highest air temperature ever recorded (134ºF, in 1913), the Sonoran is on average hotter. And wetter.

The Mojave and Sonoran deserts share a few wildflower species, or more often a few genera, which made identifying the plants a bit easier. I found about 75 different species in 23 families (with half a dozen still unidentified). The Asteraceae and Boraginaceae were well represented. And this time I saw some cacti blooming, too.