The Sonoran Desert’s wildflowers range from belly-flower sized to big and showy. Here are two of the latter. Although honestly, I took a lot of belly shots anyway. It was a sandy belly, sandy elbows kind of week. 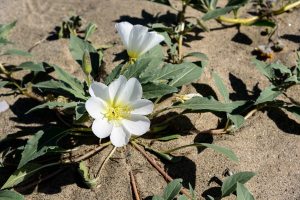 There’s a native Oenothera species for every state in the Union except Alaska. Dune evening primrose is more widespread than many of them, and more widespread than many of the species I found in Anza-Borrego; it ranges from the Chihuahuan Desert north through the Sonoran and Mojave Deserts to the Great Basin Desert in Oregon, and also somewhat inland and along the California coast. 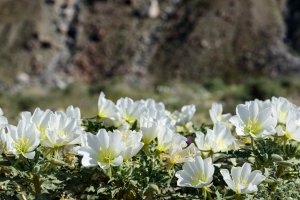 The plants I saw spread out along the sand maybe as much as three feet, and stood up to about a foot tall. I’ve read that in other parts of its range desert evening primrose can stand up to three feet tall. It’s described by various sources as both an annual and a perennial, so I’m not sure what to conclude there. One thing’s for sure, in Anza-Borrego at least it grows in association with this next plant. Almost any time I saw one, the other was there, too. Or close by.

Desert sand verbenas are not actually verbenas, which are in their own family. It’s in the four o’clock family (Nyctaginaceae). It is similar in size and growth habit to the dune evening primrose, but with a smaller range, being mostly restricted to the Sonoran and Mojave deserts, and some inland and coastal areas in California.

Take a look at the flowers. Looks like each has five petals, right? Not really. Another botanical oddity. More on that and other desert plants in the Nyctaginaceae next time.

There are at least six different species shown flowering in the first photo, and one plant not flowering but clearly a seventh species (not counting the dead ocotillo). Click on it to see it larger. This was one of the neat things about the super-bloom: so many different species growing together, forming crazy bouquets.