There are so many interesting plants in the desert, and not just forbs. In mid March when I was at Anza-Borrego, shrubs were in full bloom, too, and one really unusual tree-like plant was just starting. And then there were the palms.

This shrub goes by the common names brittlebush, incienso, and gold hills. I saw them all over the place, standing like good omens, saying “welcome to Anza-Borrego!” with their cheery yellow flowers. Brittlebush is in the Asteraceae, of course, and can be found on hillsides and slopes in the Sonoran and Mojave deserts, at elevations from below sea level to 3,000 feet above or more, depending on which authority you consult. 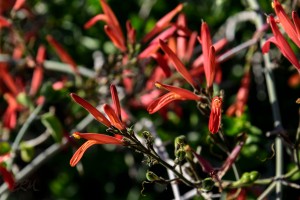 Known commonly as beloperone, chuparosa, and hummingbird bush, this species is found mostly in the Sonoran Desert, with a few occurrences in the Mojave. It can grow to six feet tall and twelve feet wide. Justicia, a genus in the Acanthaceae, has over 600 species, only a few of which are found in North America. Of those, the most widespread is Justicia americana, which ranges from Texas to Quebec; there are vast stands of it in the Potomac River every summer.

Ocotillo is such an unusual plant, it deserves a post all its own, but I’m short on time. Each stem can grow to 20′ tall, and a mature plant can have dozens of stems. They bear leaves only after sufficient rain. The bright red flowers attract hummingbirds. 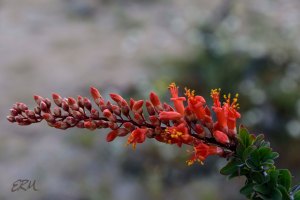 From a distance you might think they’re a type of cactus, but they aren’t even closely related. (Going up on the taxonomic tree, cacti are in the order Caryophyllales, while ocotillo is in the Ericales.) There are only eleven species in the genus Fouquieria, which is the only genus in the family Fouquieriaceae. Ocotillo grows on slopes and hillsides, ranging from the southern Mojave through the Sonoran and Chihuahuan deserts.

Speaking of hummingbirds, while I was shooting some low-growing plant or other I heard this loud buzzing, and looked up to see this —>
That’s a black-chinned hummingbird, Archilochus alexandri. Once more I was both thankful to have a zoom lens, and wishing I had a longer zoom lens.

One of the greatest wildflower displays in Anza-Borrego was along the Borrego Palm Canyon trail, a nice, easy hike up a gentle grade that leads to actual running water and a big group of Washingtonia filifera, California fan palm. This plant in the Arecaceae can reach heights of 60 feet in the presence of open water. Click on the picture to see it larger; note the people on the boulder for scale, and how the brittlebush and chuparosa are growing together. California fan palm is native to the Sonoran and Mojave deserts, and is the only palm native to western North America.

1 thought on “Desert Shrubs and “Trees””