Yesterday’s post had a quote about twinleaf being distinct from Sanguinaria and Podophyllum. All three have their similarities, especially in the flower, which in each case is large and white with numerous petals. Twinleaf is in the genus Jeffersonia, which has only two species, while both Sanguinaria and Podophyllum are (currently) monotypic genera. The latter is represented by P. peltatum, mayapple or maypop, which like twinleaf is placed in the barberry family (Berberidaceae). The former is represented by S. canadensis, bloodroot, which is in the poppy family (Papaveraceae) and blooming now in the Maryland piedmont. I’ll write about maypop once they’re blooming and I can get some pictures. 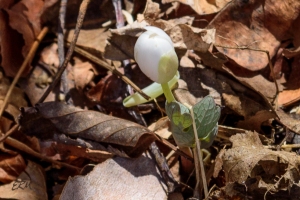 Bloodroot is a perennial plant that forms colonies from the rhizome, so more likely than not if you find one, you’ll find others nearby. The roots contain a reddish-orange sap, hence the name Sanguinaria, which means bleeding. The plant stands a little less than a foot tall, with a single multi-lobed basal leaf that emerges with the single flower stalk; while still young the leaf clasps the stem, but as the flower fades it opens fully. Although it doesn’t have the mirror-image symmetry of the twinleaf, you can see why early botanists might have considered the two closely related. (Until fairly recently, taxonomy was based largely on flower and fruit morphology.) 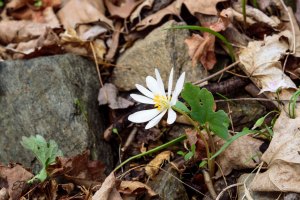 The flower can be large (up to three inches in diameter), with eight or more petals, two sepals, numerous stamens, and a single pistil.

Bloodroot is one of the spring ephemerals, and has a wide native range, occurring in some areas to the west of the Mississippi River but primarily east of it, from northern Florida north into Canada. It’s listed as exploitably vulnerable in New York and special concern in Rhode Island.