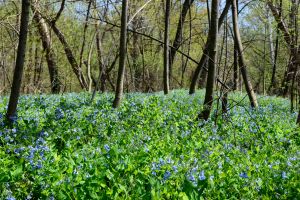 Isn’t it glorious? The entire forest floor was carpeted in Virginia bluebells, as well as significant quantities of wild blue phlox and some golden ragwort. I didn’t look hard, but there were no alien species visible.

I bet a Weed Warrior is maintaining it.

In other news, the season is moving along. Dutchman’s breeches and cut-leaved toothwort are pretty much done, and so are the trout lilies. Spicebush is leafing out. Look up and you can see bladdernut and pawpaw blooming. Look way down and you can see wild ginger. There’s also sessile bellwort, golden Alexanders, short-spurred corydalis, and Coville’s phacelia.

1 thought on “This is How it Should Be”