Walking along the canal between stands of irises the other day I caught a whiff of something delightfully fragrant, so I had a look ’round. Never did find that flower, but I did find a hophornbeam.

Hophornbeam (Ostrya virginiana) is a small tree in the birch family (Betulaceae) that’s native to eastern North America, ranging from northern Florida north into Canada and west into parts of the Great Plains. In Maryland hophornbeam grows in the piedmont and west, with occasional occurrences in the coastal plain. Two other species of Ostrya are native to North America, but they’re found only in the desert Southwest.

The flowers are imperfect and inconspicuous catkins; female and male flowers are borne on the same tree. It’s the fruit that gets noticed, nice little nutlets that resemble common hops. 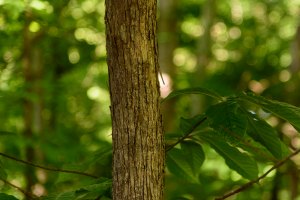 It’s a handsome tree, with small, doubly serrated dark green leaves and somewhat shaggy bark. Look for it growing in dry woodlands, usually as an understory tree. Given more sun it can reach heights of 50 feet or more. (The national champion is 74 feet tall.) 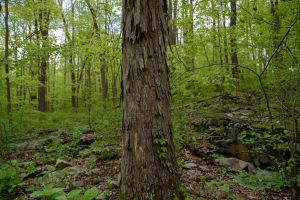