Somehow I’ve managed to miss seeing this plant in bloom for two seasons, so Sunday morning, after seeing friends posting pictures of it on various on-line forums, I took a little walk to “Erica Alley”, a rocky place on the Cabin John Trail that’s full of mountain laurels and blueberries. And sure enough, there it was, blooming among the leaf litter on a slope above the creek. 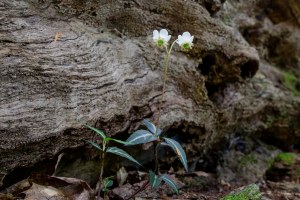 ant’s eye view: camera on the ground, lens propped up, downslope of the plants

This short, evergreen forb grows in dry to moist, rocky, acidic soils in woodlands east of the Mississippi, ranging from northern parts of the Deep South to southern Maine and Michigan, and Ontario and Quebec. (It’s also found in one county in the Florida panhandle and in southern Arizona.)

It’s endangered in Illinois and Maine, and exploitably vulnerable in New York.

In another bit of name confusion, around here I sometimes hear it called “prince’s pine”, which sounds a lot like “princess pine” – an entirely different plant, but the two are often found growing together.

Common names. What a headache.

A literal translation of Chimaphila would be “winter-loving”, referring to the evergreen habit; isn’t even closely related to that other wintergreen, Gaultheria procumbens. Confusingly, maculatum means “spotted”, which clearly this plant isn’t, though it is sort of striped, what with the pale green to white coloring of the mid-vein and larger lateral veins.

Two to five flowers (usually) are borne on a cyme. Typical of plants in the Ericaceae, the flowers have five sepals, five petals (strongly reflexed), ten stamens, and one pistil. The plants spread by rhizomes, so if there’s one, there should be more a short distance away.

This species is currently placed in the Ericaceae (heath family), but many on-line sources and older texts still refer to it being in the Pyrolaceae. In some taxonomic systems Pyrolaceae has become Pyroloideae, a subfamily of Ericaceae.

I really can’t explain why some flowers are more aesthetically pleasing than others, but this charming little thing always makes me smile. I’m so glad I saw it this year.

some of the common names listed above were found in The History and Folklore of North American Wildflowers, Timothy Coffey (Houghton Mifflin Company, 1993)

3 thoughts on “One That Makes Me Smile”