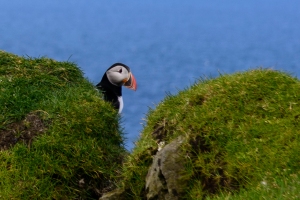 When I was a child I had a picture book of birds of North America. I was delighted by the picture of the Atlantic puffin, and dismayed to read I had to go to Maine or better yet Canada to see one. 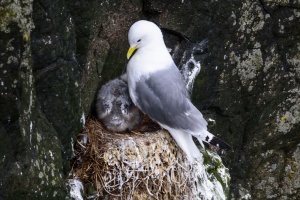 That memory came back to me on our trip to the Faroe Islands. On America’s Independence Day, Steve and I set out on a small ferry from Sørvágur across choppy waters to the small island of Mykines (pronounced “Mitchiness”). A short but tricky hike took us west from the village and across a bridge to the sister island Mykines Hólmur, known for its lighthouse and bird colonies. There were kittiwakes (right) and gannets by the thousands.

The Atlantic puffin (Fratercula arctica) is pelagic, spending more of its life at sea than on land. In spring, they come to shore to breed, each female laying a single egg in a burrow dug into a rocky cliff, then they return to the sea in late summer. Their nesting sites range from Maine north through coastal Canada, Greenland, Iceland, Russia, the Faroes, Norway, Scotland, and Ireland. 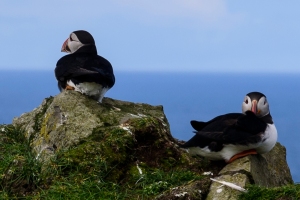 The fledglings will spend up to five years at sea before returning to nest in the colony where they were born. They appear to mate for life, although apparently that’s coincidental: what they really do is return to the same burrow year after year.

They look a little awkward in flight, even though they reach speeds of 88 kilometers per hour, wings beating 400 times per minute. But puffins are excellent swimmers. They dive for fish, staying under 20-30 seconds, or sometimes as long as a minute, then return to their burrows with up to a dozen small fish in their bills.

Puffins don’t nest in places where there are land-based predators (not for long, anyway). One of the nice things about Mykines Hólmur is that the puffins are right there, easy for humans to get to, once they’ve gotten to Mykines, that is. The problem is that the birds are in danger of being loved to death. People leave the trails to get close to the birds, which spooks the birds sometimes, but more importantly, the burrows get trampled, and sometimes the chicks get trampled within them.

So the Faroese government passed a law earlier this year: visitors to Mykines are not allowed to leave the village without a tour guide. However, they have no way to enforce the law, and not enough tour guides for the number of people the ferry can bring. 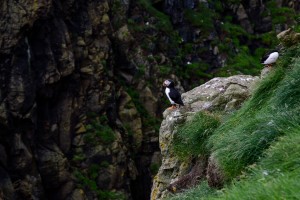 The tourism infrastructure in the Faroes isn’t well developed yet, but the number of tourists is increasing. Hopefully the Faroese won’t allow their wonderful islands to be loved to death.