Monday, March 5 – took a quick walk on the Cabin John Trail. Most of the green forbs were aliens, though the new foliage of a few ephemerals was coming up. 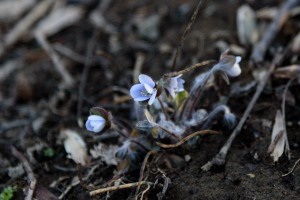 There was one small clump of round-lobe hepatica (Anemone americana; Ranunculaceae) with a few buds opening. It’s early, but not too early, for this species to be flowering.

And a few clumps of Virginia bluebells (Mertensia virginica; Boraginaceae), one of which was starting to bloom. This is quite early, but with the ephemerals I often see one or two blooming on either end of the bell curve. Peak bloom for bluebells is probably at least three weeks away.

5 thoughts on “Waking Up”