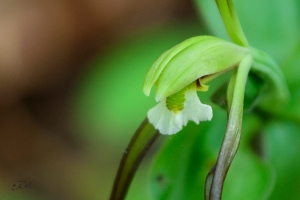 Sunday evening I’m on the computer, browsing various internet forums*, and I see a post from someone who’s found some nice flowers in a nearby park. When I read the words “large whorled pogonia,” my heart skips a beat. 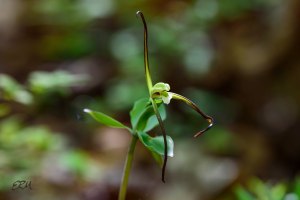 So first thing Monday morning, plans to go hunting for lady’s slipper orchids are scuttled, and off I go to add another wild orchid to my life list. 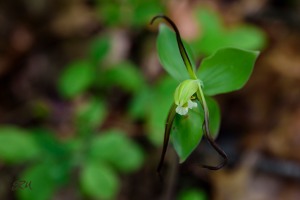 Isotria verticillata (formerly Pogonia verticillata and Arethusa verticillata) ranges from eastern Texas northeast well into New England. It’s endangered in Florida, Illinois, New Hampshire; threatened in Michigan and Vermont; exploitably vulnerable in New York; and possibly extirpated in Maine. But it’s secure in Maryland, where it can be found in the piedmont and some western parts of the coastal plain.

Like most orchids found in the continental US, large whorled pogonia is terrestrial. It likes moist to dry woodland soils, and is pollinated by bees. Also as is typical of our native orchids, because of specialized cultural requirements, it isn’t very common. 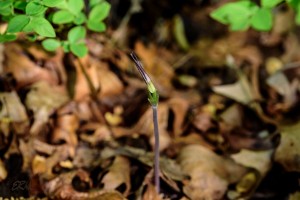 I was on the same trail just five days before shooting these pictures, and didn’t see the plants. As you can see from the previous picture, they don’t exactly stand out, but they aren’t hidden, either. On the other hand, here’s a picture of one recently emerged and not yet open. I think it’s likely that five days ago there weren’t any to see.

4 thoughts on “Seven Down, Forty-some To Go”