I took this picture four years ago when still fairly new to photography, learning to use a new lens (105mm macro) and not sure what I was doing. Lying on my belly to get some close-up shots of miniscule blossoms on other plants, I happened to see these little pendant blue flowers and shot them, too. I had no idea what the plants were.

Later at home I keyed them out to veiny skullcap (Scutellaria nervosa). And then I learned that the species was listed S1 and endangered in Maryland!

Currently it’s listed S1/S2 endangered, with a status change to threatened pending. According to the Maryland DNR,

Endangered: A species whose continued existence as a viable component of Maryland’s flora is determined to be in jeopardy.

I went back as soon as I could to get better pictures, but couldn’t find the plants, despite knowing exactly where to look (geotagged with iPhone). And I’ve hunted for them every year since, but have never found them. 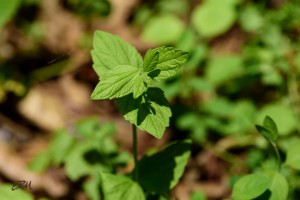 Until a few days ago.

I won’t be positive until they bloom, but the appearance of the leaves and stem, coupled with flower bud location (in the upper leaf axils), leaves little doubt.