Two weeks ago I mentioned long-tube valerian in a post. This plant bedevils me. It grows in the deep, deep shade of the woods, often along the banks of seasonal streams and in other very moist soils. The deep shade makes it difficult to photograph, especially since I need to use a very small aperture to get the entire inflorescence in focus. 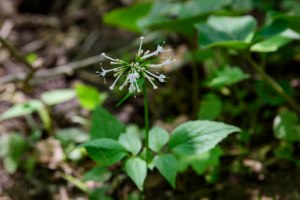 Valeriana pauciflora, whose other common names are few-flowered valerian and large-flowered valerian, is in the Caprifoliaceae (honeysuckle family), and is listed S1/endangered by the Maryland DNR. Its native range is restricted almost entirely to the Ohio River drainage basin, along with a few occurrences on the lower Susquehanna River, central Maryland, and northern Virginia. 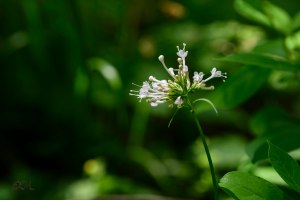 The plants I’ve seen consist of a single delicate stem that grows to about two feet tall, sporting a terminal cyme of flowers. The compound leaves have 3 leaflets each, the terminal leaflet often with an elongated tip. According to descriptions I’ve read in other sources, there can also be inflorescences in the upper leaf axils; sometimes these are described as panicles rather than cymes; also, the leaves can have as many as seven leaflets.

The are fourteen other Valerian species found in North America, only one of which is in the mid-Atlantic (barely).

I’ve never managed to do it justice in pictures. This one from 2014 is still my favorite.

But I’ll try again next year.