Taxonomy fascinates me.  We don’t seem able to understand a thing until we put a name on it.  When you’re a hobbyist without a background in botany, taxonomy becomes challenging, and it isn’t made easier by the fact that the experts keep changing their minds – and the names of things. 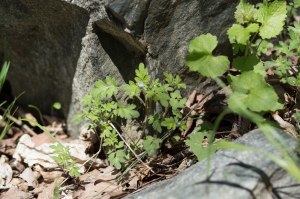 Weedy looking thing, isn’t it?  I knew the name but little else, so it was in the back of my mind when I discovered this plant.  One of my books had an identical plant listed as oceanblue phacelia (P. ranunculacea), but did not show that plant in this area.  Well, plant populations move over time, so this could be it… right?

Then while hiking with a Maryland Native Plant Society group I learned that it’s called Coville’s phacelia (P. covillei), and is common in some parts of the mid-Atlantic.  Huh.  So I looked it up in Finding Wildflowers in the Washington-Baltimore area, which people in MNPS consider a bible of sorts.  And guess what?  The same plant there is called Coville’s phacelia – P. ranunculacea.

Whatever.  A scorpionweed by any other name is globally rare and pretty neat to find.  Here’s an extreme closeup.  The flower is about 1/16″ across: 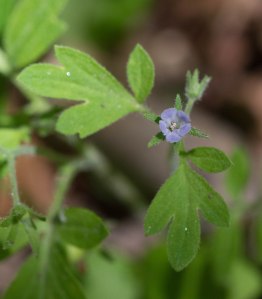 The other species readily found in this area is fringed phacelia, aka Miami mist (P. purshii):

Big thanks to my friend Linda for giving me Finding Wildflowers. The fact that I had a hardbound first edition impressed the MNPS people, but more importantly, it’s a really neat book.

1 thought on “Flowers of the Day: Phacelias. What’s in a Name?”