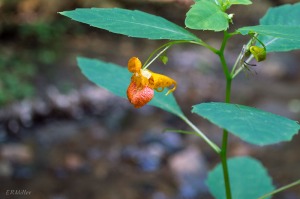 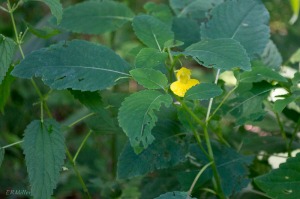 Of the five native North American Impatiens species, three are found in the Pacific Northwest, while I. pallida is a more eastern species and I. capensis is found almost everywhere except California and the drier states of the West.  The former species is listed as “special concern” in Maine; otherwise there are no conservation issues with either.

Impatiens pallida and Impatiens capensis are almost identical; the only significant differences are the flower color and position of the nectar tube (sadly, I was unable to get close enough to any blooming I. pallida for a clear illustration of this). 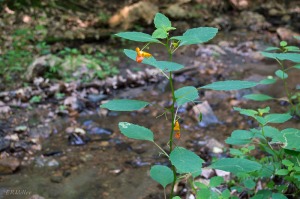 Both plants grow to 5 feet tall, preferring wet soils.  You can find I. capensis along the edges of small streams and the banks of the C&O Canal.  I. pallida is less common in the Potomac Gorge, though I did see a few plants just outside Washington, DC.  There are huge stands of it lining the canal at Snyder’s Landing, near Sharpsburg.

Snyder’s Landing, by the way, is a great place to hunt for ferns.  More on that another time.