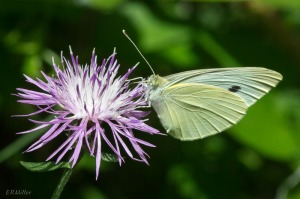 How can you hate such a lovely flower?  Let me count the ways.

I’m a native plant enthusiast.  Finding aliens in the wild bothers me.  It’s not so much a vague “they don’t belong here” feeling, but more of a fear that today’s ooh-isn’t-that-pretty exotic will be next year’s monoculture-forming, native-killing beast.  Like wavy-leaf basket grass, or Oriental bittersweet.  Or spotted knapweed (Centaurea maculosa; Asteraceae).

Of the 32 species of Centaurea found in the US, only three are native.  And none of those are found in West Virginia, where these shots were taken (along the Potomac River in Shepherdstown).

I didn’t study the plant, so I didn’t get enough information to make a positive identification.  I was on a group hike hunting for ferns – actually, for a quite rare fern (subject of a future blog post, for sure) – when I spotted the butterfly and snapped a few quick pics before catching up with the group.  But based on data from BONAP (Biota of North America Project) and USDA PLANTS Database, I’ve narrowed the possibilities down to:

With nothing else other than these pictures to go on, I suspect it’s the last one – Centaurea maculosa, the worst of the worst.

This species is a major pest in the West.  And by major, I mean that it’s known to form multi-acre monocultures, out-competing every other plant and rendering the land almost useless for livestock forage.

For awhile people believed that spotted knapweed was allelopathic (producing compounds that inhibit the growth of other plants), but recent studies have shown that it actually out-competes other plants by working symbiotically with a carbon-stealing fungus.  (More fascinating and disturbing details at wildflowers-and-weeds.)

“Spotted knapweed is considered a serious threat to rangelands in Montana, Washington, Idaho, Oregon, Wyoming, and British Columbia. Because of its affinity for the climate of western Montana, Chicoine and others [25] predicted that spotted knapweed had the potential to invade 37 million acres (15 million ha) in that state alone, and Bedunah [11] speculated that the foothill grasslands in western Montana (the primary habitat for spotted knapweed) are becoming an endangered vegetation type.”  (emphasis mine) 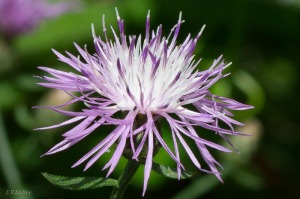 Sure makes a pretty picture, though.