The late summer not-quite drought wiped out a lot of flowers, but others are starting to bloom after the recent rains. The earlier goldenrods are mostly gone, but this is one of two later-blooming species that are coming along nicely.

With over 70 species in the continental US (two dozen of which occur in the mid-Atlantic Piedmont), it can be difficult to distinguish one Solidago from another. This species is an easy one, though, with large, serrated, ovate leaves with petioles at the middle of the (usually) unbranched stem, and upper stem leaves that are lanceolate. In most specimens, there’s a bend at each node, hence the name “zigzag” goldenrod.  (The specific epithet, flexicaulis, means bent stem.) 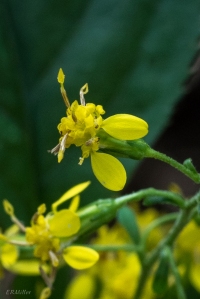 zigzag goldenrod typically has only a few ray flowers; in this photo you can see the opened disk flowers

Zigzag goldenrod is found east of the Rockies except in parts of the deep South. It’s threatened in Rhode Island.

and in this photo, the disk flowers have not yet opened