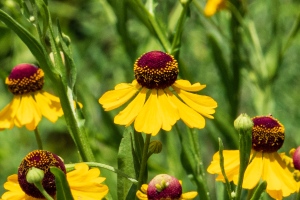 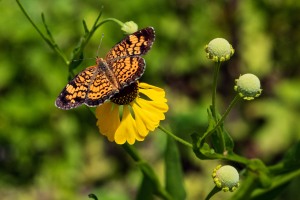 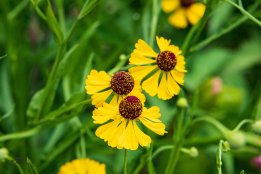 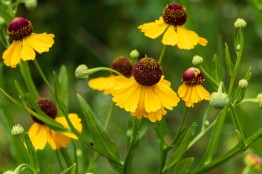 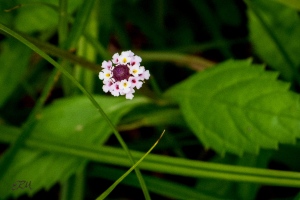 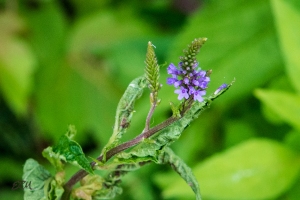 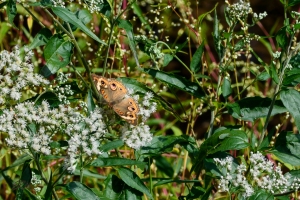 Now that we’re into October one of the white-flowering aster family plants I wanted to write about (late-flowering thoroughwort or late boneset) is just about done blooming, but the other one (white snakeroot) is going strong still.

Both of these plants were once placed in the genus Eupatorium, but in 1970 the snakeroots were moved to the genus Ageratina*. Interestingly, it took a long time for the guidebooks to catch up. Newcomb’s Wildflower Guide (1977) and Field Guide to Wildflowers (National Audubon Society; 1979) still refer to white snakeroot as Eupatorium rugosum. The earliest printed reference to white snakeroot as Ageratina altissima that I can find (in my small library) is from 1993, in The History and Folklore of North American Wildflowers (Timothy Coffey).

[above left: E. serotinum being inundated by Japanese stiltgrass and something in the Polygonaceae; above right: A. altissima]

But enough about taxonomic history; more about the plants: from a distance they look similar: tall, leafy forbs with large arrays of fuzzy, white, joe-pye-like flowers. But close up, the differences become clear and it’s trivial to tell which species is which.

Despite the name “late-flowering thoroughwort”, Eupatorium serotinum blooms in August and September, while Ageratina altissima blooms from September into October (this year, anyway). E. serotinum stands about a meter or two tall; A. altissima stands at about a meter at most. Both tend to be single-stemmed with occasional branching, more so up top.

The flowers of each are borne in corymb- or panicle-like arrays, E. serotinum tending to be a bit flatter overall, and A. altissima being somewhat rounder. Both species produce only disk flowers, the long styles protruding to give a feathery effect (like in joe-pye weeds). Most of the time the flowers of E. serotinum seem more tightly bunched together and more tightly closed, while A. altissima flowers are more open, the five petals easy to see. Also note that the phyllaries of E. serotinum are covered in fine white hairs (A. ageratina phyllaries sometimes have a few sparse hairs).

Here’s where it’s easy to tell the difference. Both plants have opposite leaves (mostly). The leaves have petioles, but the leaf shapes are distinctly different. E. serotinum has lance-shaped leaves that often curl in a bit at the edges. A. altissima has more-or-less ovate to heart-shaped leaves. Keep in mind that, as with so many aster-family plants, the leaves tend to get smaller and more linear further up the stem, and near the inflorescence they can be alternate rather than opposite.

Late-flowering thoroughwort is one of about a dozen or so Eupatorium species whose native range includes the Maryland Piedmont. For three years now I’ve been wanting to write about all of these, but I don’t have pictures that clearly illustrate the differences. Also, the taxonomy is a bit confusing. I need to make a study of it when I can find good examples of the plants, key them out, and take better pictures.

There’s only one other species of Ageratina in Maryland, A. aromatica, aka lesser snakeroot. Here’s a picture from 2014; I haven’t seen one since.

Last week when I drove to Lock 6 in search of the two Verbesina species, I was pleasantly surprised to find two Helianthus species growing in the same area. Sunflower species can be tricky to differentiate, but I’m fairly confident that these are H. decapetalus and H. tuberosus. Here’s a closer look at both. 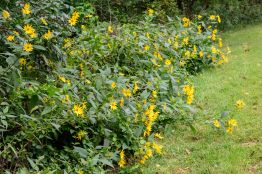 First thing to note is that these were likely planted here, and are growing in rather rough conditions (lots of foot traffic, dogs, invasive alien plants, lawn mowers), so neither stand is showing the plants at their best. Depending on what source you consult, both thin-leaved sunflower (H. decapetalus) and Jerusalem artichoke (H. tuberosus) stand anywhere from half a meter to two meters tall. Many sources seem to agree that generally, the former is not as tall as the latter. 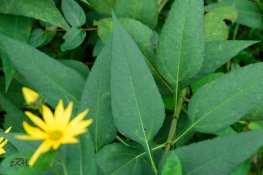 The leaves of each species look very similar. The largest leaves of H. tuberosus are usually somewhat larger than the largest leaves of H. decapetalus, but keep in mind that there is a lot of morphological variation in Helianthus species. Note that in this picture, the H. decapetalus leaf has more pronounced teeth, which is another general characteristic. Serrated margins like this are best observed on lower stem leaves. Also, note that both leaves are winged to some extent. Both leaf margins and presence of petioles are characteristics that can vary widely, even on the same plant. 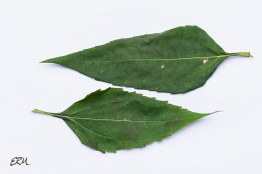 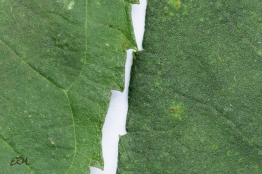 Another, more obvious difference is seen in the stems.  H. decapetalus stems are mostly smooth, maybe with a few short hairs. H. tuberosus stems are covered in short hairs that stick straight out. 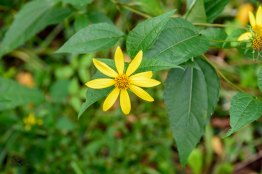 About the flowers… Clearly they look a bit different. Don’t let the specific epithet decapetalus fool you, because this species does not always have ten ray florets (“petals”). It will usually have about ten rays, though. H. tuberosus has about ten to twenty, though some sources say as few as six and as many as twenty-five. In these two populations, the ray florets look a little different, a little wider and rounder on H. decapetalus, and a little longer and narrower on H. tuberosus.

As with the verbesinas in my last post, I caution you against using any one characteristic, or any one flower head or leaf, or any one section of stem, to determine the identification. You really need to look at the entire plant – several leaves, several flower heads, several stem sections – to be sure.

Helianthus identification is fraught with peril. It’s highly likely that I have H. tuberosus here, but there is one other Helianthus in this area that has hairy stems: H. hirsutus. These two look similar at the stem, but the latter species has much longer and narrower leaves, which are either sessile or with very short petioles. H. hirsutus is listed S1/highly state rare in Maryland. I’ve never found it, so I can’t share any pictures to illustrate the point.

Here’s one more Helianthus, just for fun: H. divaricatus (woodland sunflower). The differences should be obvious.

Lining the highways this time of year are lots of tall white-flowering and yellow-flowering forbs. Various species of goldenrod are among the latter, and so are two other members of the Asteraceae: wingstem and yellow crownbeard, the only species of Verbesina present in Maryland (probably).

At first glance (or at 60 miles per hour), the two look a lot alike. Each can get quite tall, up to two meters, and each has large leaves, thick-looking stems, and dense arrays of composite flowers.

But it’s easy to distinguish between them. Have a look at the similarities and differences. [In the following pairs of photos, V. alternifolia (wingstem) is on the left, and V. occidentalis (yellow crownbeard) is on the right.] 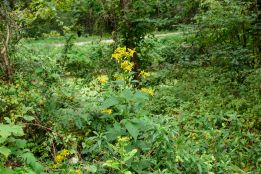 Both have leaf-like tissue running along the stems (hence “wingstem”).

Note my frequent use of the word “mostly”. There is a lot of morphological variation in these species. In general – and this applies to Symphyotrichum, Helianthus and many other aster family species as well – the leaves tend to get smaller as they ascend the stem, and they start to alternate at the top. You need to consider the entire plant – observe the leaf arrangement at every node, especially lower on the plant – in order to decide what the overall arrangement is. 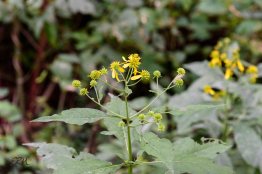 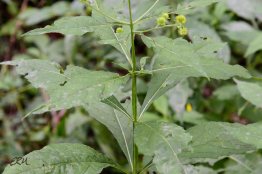 Speaking of morphological variation, have a look at this. The flowers say wingstem, but how about those whorled leaves? I’m not sure what to think. This one plant was found in an area where both species were growing. Could it be a hybrid? 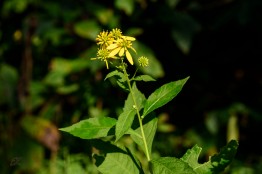 Now look at the flowers. V. alternifolia often has fewer heads per array than V. occidentalis. However, this should not be considered an identifying characteristic, especially since it’s hard to define exactly what constitutes an array. And, V. alternifolia might have a larger number of arrays (instead of the single one pictured here). 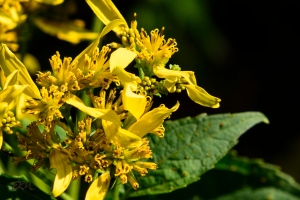 These two species grow in the same habitats. I find them on moist soils at the margins of the woods, the river, the canal, and roadways. If you want to get a really good look at them side by side, take a trip to the C&O Canal Lock 6 parking lot on the Clara Barton Parkway. Right between the lawn and the trees, you can find both. You can also find two other closely related astery things, but that’s the subject of my next post.

Now, about my claim that these are the only two Verbesina species present in Maryland… BONAP and USDA PLANTS both show two other species present, but neither source gives county-level data. Look at the BONAP map for V. virginica.

It doesn’t look like this species would be present here in Maryland, does it? If it is, it’s on the lower Eastern Shore. The Maryland Biodiversity Project has no records for it, though, and classifies the other species (V. encelioides) a waif, with only four records, all in Baltimore city. 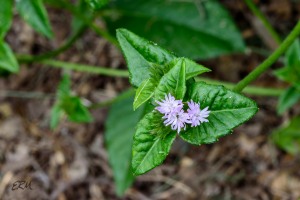 When an unknown plant appears in my garden, I’ll watch it grow for a season before deciding if it’s a weed.

What is a weed, anyway? My favorite definition is “a plant growing where it isn’t wanted”. 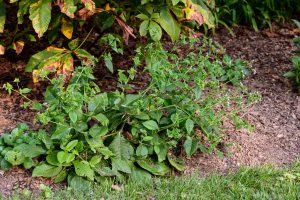 Despite this practical concept, I’ve had a hard time deciding if the Elephantopus carolinianus that appeared as a volunteer in my garden deserves weed status. It’s an interesting plant that stands about a foot and a half tall, with thick but sparse leaves that result in an open, somewhat coarse texture, and it has appealingly unusual flowers. However, it’s deep-rooted and seeds itself freely, which means high weed potential.

Unlike the other species in this series of posts, whose flower heads contain only disk florets, Carolina elephant’s-foot consists only of ray florets. You have to look very closely to see it, but each flower head contains from one to five individual flowers (usually four); each one of those flowers has a single petal that’s so deeply lobed, it appears to be five separate petals.

Look for E. carolinianus in dry soils in sunny or partly sunny areas, for example near rock outcroppings in a woodland, or in disturbed, open areas. It ranges from southern Pennsylvania (where it’s endangered) to eastern Texas. Three other species of Elephantopus are native to the US, all with smaller ranges centered on the southern states.