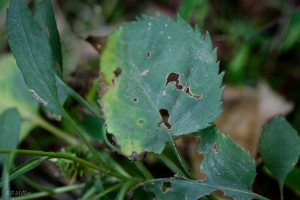 the two photos above show adjacent leaves on the same plant

At one time the genus Aster comprised about six hundred different species in Asia, Europe, and North America, but molecular phylogeny research led to a major reclassification. As a result, only one species native to North America is left in the genus Aster. Other than that one (A. alpinus), Aster is reserved for Eurasian species. The North American aster species were placed into ten new genera.

Species in five of those genera, Doellingeria, Eurybia, Ionactis, Sericocarpus, and Symphyotrichum, are found in my geographic area of interest.

Newer guidebooks, like Clemants and Gracie’s Wildflowers in the Field and Forest, reflect these changes.

In many cases, the name change is straightforward: Aster ericoides is now known as Symphyotrichum ericoides, for example.  But in some cases – like with the flowers pictured in this post – it’s anything but straightforward.

I was studying these pictures and using the venerable Newcomb’s and Peterson’s guides to try to figure out whether they’re Aster sagittifolius, Aster lowrieanus, or Aster cordifolius (and expecting that they would likely be the Symphyotrichum equivalent). Not making much progress, I turned to the internet, and found the following:

According to USDA Plants, Aster cordifolius is now Symphyotrichum cordifolium, a name accepted by ITIS.

According to USDA Plants, Aster lowrieanus is Symphyotrichum lowrieanum, a name not accepted by ITIS, which considers S. lowrieanum to be a synonym for S. cordifolium.

Confused yet? So am I. And without a sample at hand I can’t really narrow them down. In order to correctly identify them, I’m going to have to either collect samples (which I won’t do, for both ethical and legal reasons), or try to use my iPhone to access a good dichotomous key on the internet while in the field. It doesn’t help that by the time I found these plants, they had lost their lowest stem leaves.  By now they might be pretty ragged. 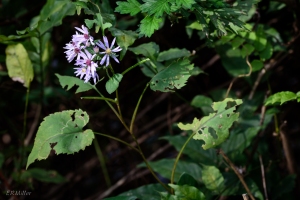 Postscript: Just for fun, here’s an excerpt from the Astereae Lab overview of asters:
“…However, during the last decade analyses of morphology, chloroplast DNA restriction fragment length polymorphisms and ITS sequence data, and on going karyotype studies have all demonstrated that asters are polyphyletic and members of a number of very distinct phylads within the tribe…”
————
I researched the hell out of this subject, and used the following sources extensively:
USDA Plants database
ITIS
Maryland Biodiversity Project
University of Waterloo Astereae Lab
Wikipedia
Illinois Wildflowers

3 thoughts on “Are Asters Really Asters?”