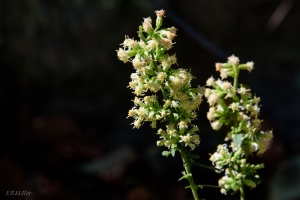 This is one of only two species of Solidago that isn’t golden, though if you look closely you’ll see that the disk flowers are often pale yellow while the rays are white.

Confusingly, the other white flowering species is called upland white aster, but despite the common name is actually a goldenrod, Solidago ptarmicoides.

Silverrod is a plant of the eastern US and Canada that ranges as far west as Missouri, Quebec in the north, and south to the Gulf Coast (but not Florida).  It’s a low-grower, seldom exceeding two feet, and prefers drier soils in open woodlands.

I never have managed to get a really good picture of it, for some reason.