I figure if the various hard-to-tell-apart yellow flowers can be referred to as DYCs, then I can refer to the white ones as DWCs. Here are two of them from Death Valley.

The flowers of gravel ghost stand about 2 feet from the ground on naked stems; the only leaves are gray-green and form a basal rosette. 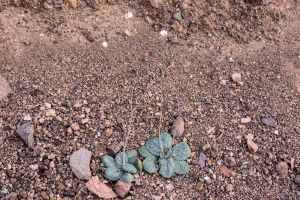 See how the flowers appear to be floating in mid-air?  You can barely make out the stems.  This is how the plant comes by its common names.

Young inflorescences are really pretty up close: the rays are tipped in purple. 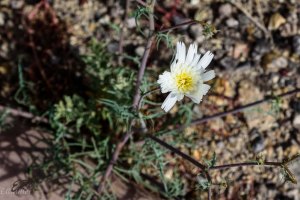 In contrast, desert chicory has leaves on rather weak stems, so that the plant is often seen either somewhat flopped over or growing through another plant for support.

Gravel ghost is found in the deserts of California, Nevada, Utah, and Arizona. Desert chicory can be found in the same states and also New Mexico and Texas. Both plants are annuals.