Catoctin Mountain Park consists of more than 5,000 acres along Catoctin Mountain, part of the Blue Ridge Mountains, which are the front range of the Appalachians. It’s in the Blue Ridge physiographic province (not the Piedmont where I usually hunt), so unsurprisingly I saw some different wildflowers when I went hiking in the Owen’s Creek area this past weekend. In general, plants were blooming about two weeks later than in the Piedmont. We saw:

And there was a nice selection of non-flowering plants:

The ones marked with an asterisk were new to me, so it was a good day. Since I was with a group, though, I couldn’t concentrate on photography, so I just took snapshots, and none of them are any good. If it stops raining I might go back and try to get good pictures, and then I’ll post about these plants. 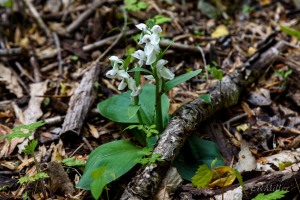 ps: A pedantic note: all the binomial (eg, Latin) names in this post should be italicized, but wordpress won’t let me do that with captions. I might have to stop doing captions for that reason.