In May of 2014 I saw puttyroot for the first time, two plants and one spike of flowers. After that I saw the seedheads on the spike. Every time I was in the area I’d go by the patch, and (except in summer) I’d see the plants. But in 2015 for some reason they didn’t bloom. I learned later that this is often the case with some species of orchid: if conditions aren’t just right, they won’t bloom.

A puttyroot plant has a single ground-level leaf that comes up in autumn, persists through the winter, and dies back before the plant sends up the flower spike in late spring. 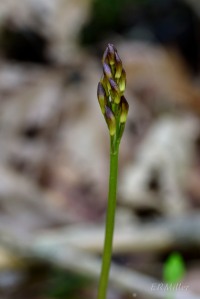 A few weeks ago I saw a new spike coming up. I went back again and again, despite the miserable rainy weather we’ve been having, until finally I saw the flowers.

Puttyroot ranges from Quebec south to North Carolina, with scattered occurrences a little further south than that, and west as far as Oklahoma, Kansas, and Minnesota. It’s endangered in Massachusetts, New Jersey, and New York, threatened in Vermont, rare in Pennsylvania, and special concern in Connecticut. In the Maryland Piedmont I’ve seen the plants in the Potomac gorge, Patapsco Valley State Park, and on Sugarloaf Mountain.