It’s not like me to go for two weeks without posting, but I just haven’t gotten out as much this year. And the times I have gotten out, I’m not seeing much.

On June 6 I hiked about two miles around Carderock. I found a few rather wan-looking blossoms on partridgeberry plants, a single hairy skullcap (in an area where there should have been a dozen or more), some shining bedstraw, and a few blue-eyed grass. A patch of Culver’s root I discovered a month ago appears to have been browsed by deer (bastards). Ramps are in bud. Honewort is blooming, but you really have to be a plant geek to find honewort interesting. 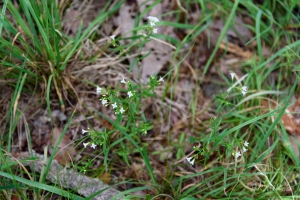 On June 7 I hiked about three miles on Sugarloaf Mountain, and found one small patch of longleaf bluets blooming. The mountain laurel are still going, though past their peak (they are all done at Carderock). Other than those and some fleabanes, I saw nothing else blooming, though there was an inch-tall spike starting on a downy rattlesnake plantain.

Looking at notes I’ve made over the past few years, I realize there is a bit of a lull from late May to mid June. But this is pretty slim pickings. I hope to get back to the Carderock area today to look for both purple bluets and longleaf bluets, though it may be too early for them.