my trusty D3200 poised by some bluets

As you may recall from yesterday, I went to the C&O Canal to determine if there were indeed two different species of bluets (Houstonia) in the area.

After 15 minutes of walking I arrived at the stand in question, and took a close look.  A really close look.  And lots of pictures.  What I found: 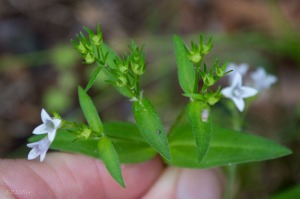 The uppermost stem leaves were narrow and one-veined.

The middle and lower stem leaves were oval and three- or five-veined.

It seems this species is Houstonia purpurea.

I walked another 50 yards or so, knowing that there was another stand somewhere, but I couldn’t find it, so I went back to the first stand and studied it a little more. Kneeling on the towpath and looking around me, I spotted some other flowers that I’d missed while standing.

This was about eight feet away from the first stand.  It’s a single plant with six flowering stems, all about seven inches tall (just like the first stand). 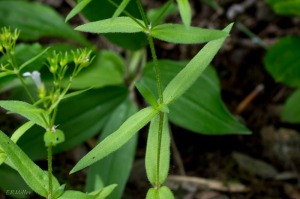 Look how long and narrow the leaves are compared to the other plant.  This one is H. longifolia.  I think.  Note the pair of leaves at top and bottom of the picture; they’re a little more oval and rounded at the base.  Could this be an intermediate form?!

the flowers of H. purpurea… 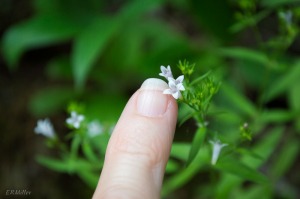 …are almost identical to the flowers of H. longifolia

Both Venus’ pride (H. purpurea) and longleaf bluets (H. longifolia) can be found across most of the eastern and mid-west US, with the latter species ranging further north and west into Canada. Longleaf bluets are endangered in Connecticut and Massachusetts, of special concern in Maine, and historical in Rhode Island.

2 thoughts on “Bluets: A Closer Look”