My recent post about yellow flag iris (“A Beautiful, Useful Pest”) was written in the lounge at Dulles International Airport while I waited for my flight to Iceland. It struck me as funny, then, that the next day, when we parked our rental car near a trailhead and started hiking, that the first flowers I noticed were the Nootka lupines. They were everywhere – wide swaths of blue-and-white flowers ascending the slopes of Mount Esja.

There was so much of it, I wondered if it was an alien invasive. In my limited experience, it’s unusual for native plants to form such massive colonies. Was this another beautiful, useful pest?

Short answer: yes. It’s native to the coastal areas of northwestern North American, and is alien to Iceland. But it didn’t sneak in via packing on a cargo ship or by hitchhiking on other agricultural material. It was introduced, possibly as early as the late 1800s (I’ve read conflicting stories), and certainly by the mid-1900s, when it was planted deliberately and extensively by first the Icelandic Forestry Service, and later by the Soil Conservation Service, to help with land reclamation.

You may recall from the previous post that after Icelandic settlement, deforestation and overgrazing led to lifeless soil, which is easily eroded and transported by winds. The Nootka lupine grows fast and roots well, keeping soils in place. It’s perfectly suited to Iceland’s cool, wet growing conditions. And like most members of the Fabaceae (pea family), it takes nitrogen from the air and fixes it in the soil, which together with decaying plant material (from dead lupines) results in soil fertile enough for native plants to colonize. It’s even thought to have helped with the problem of sandstorm-induced road closures in the eastern parts of the country.

But (of course there’s a “but”), it’s too aggressive. It grows tall enough to form a canopy that blocks sunlight to mosses and lichens (which are important pioneer species). It can invade nearby plant communities, outcompete the natives, and form monocultural stands. So yes, it exhibits the usual alien-invasive characteristics.

There’s a little more good news, though: studies have shown that in some sites, lupine colonies will eventually decline to the point where they no longer out-compete other species. It seems that if managed correctly, the Nootka lupine will continue to be a valuable tool for soil reclamation. 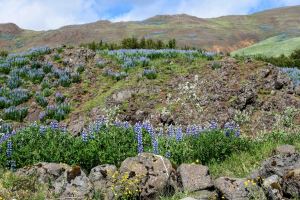 lupines on the lower slopes of Mt. Esja

3 thoughts on “A Beautiful, Useful Pest in Iceland”