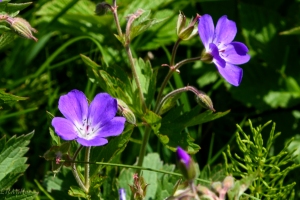 As we hiked up the lower slopes of Mount Esja in western Iceland, the vast sweeps of Nootka lupine and cow parsley started giving way to other plants. I did a double-take when we spotted this one: could it be Geranium maculatum? 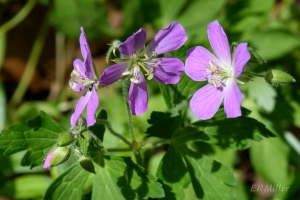 No, but it’s close. It’s Geranium sylvaticum, a species native to northern Europe (including Iceland). It’s been introduced to North America and can be found in Quebec and Greenland, so no overlap with G. maculatum, which can be found through most of the eastern and mid-western US (with scattered occurrences in the Great Plains).

G. sylvaticum stands about 12-20″ tall (about the same size as G. maculatum), and blooms in June. It has a fairly widespread distribution in Iceland, though I never saw much of it in any one place. Look for it at lower elevations in shady or sheltered areas, especially near stands of trees and in birch scrublands. It’s showy and therefore hard to miss.

In addition to Mount Esja, I saw it blooming on the Snæfellsnes penninsula, and in a wooded vale near Ísafjörðer in the Westfjords region. 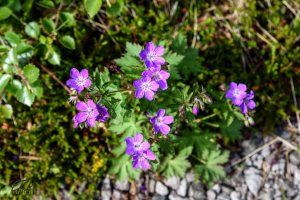 This wasn’t the only look-alike we spotted in Iceland. More on those in upcoming posts.