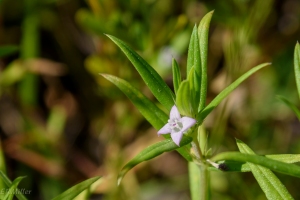 ! was really happy to find a member of the Rubiaceae growing in Serpentine Barrens Conservation Park, and even happier to realize it’s a “new-to-me” species. And then I was surprised to learn that it’s considered a nuisance weed of turfgrass. Type “poorjoe” into Google and it will autocomplete to the phrase “poorjoe weed”, and then you’ll find tips on how to eradicate it.

Poorjoe likes disturbed sites and nutrient-poor soils, like in the clear-cut area under power lines where I found these. It’s an annual plant that might sprawl a bit, but is more likely to have ascending stems. The flowers are typically lavender-colored, but there’s some variation and, like a few of the Houstonia species I’ve written about, can appear to be white (or actually be white). They’re borne in the leaf axils. The leaves are sessile, with stipules that form little cups that contain a few long bristles. The stem is often reddish-brown. 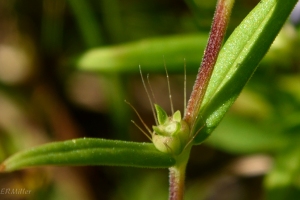 As nuisance madders go, this one isn’t nearly as bad as its cousin Virginia buttonweed (Diodia virginiana). Google that common name, and the whole first page of results will be how to control (kill) it in lawns. Virginia buttonweed is a perennial, sprawling rather than ascending, with white flowers, and no bristles in the leaf axils.

Diodella teres ranges from southern New England south through Florida and west through central Texas, with a few occurrences in the desert Southwest as well. In Maryland it can be found in the Piedmont and parts of the Coastal Plain.

What constitutes a “weed”, anyway? I like this definition: “a plant growing where it isn’t wanted”. I saw only a few poorjoe plants in an area full of invasive aliens, so I’d hardly name it a weed in that context.