The earliest blooming wildflower in the Maryland piedmont is skunk cabbage (Symplocarpus foetidus). The flower emerges from wet soils near or in small streams and blooms right there at ground level. It’s probably done now, but our next earliest native plant is blooming, and you have to look up to see it.

Red maple (Acer rubrum, Aceraceae) is one of the most common trees in North America, and ranges from Texas north to Minnesota and all the way to the Atlantic from Florida to Newfoundland. It’s also found in Oregon. Interestingly it’s reported as weedy by some authorities, not surprising since it’s adapted to a wide variety of growing conditions and produces a lot of seed.

While researching maples I had another “plants be complicated” moment, when tripping across a new term: polygamo-dioecious. It seems that some red maples can’t make up their minds whether they’re male, female, or both. Forgive the anthropomorphizing and let me explain. 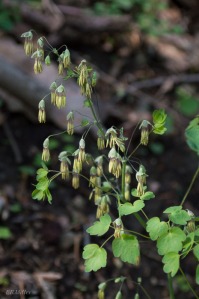 Some species bear perfect flowers only. In other species, each individual plant will bear both pistillate and staminate flowers; this condition is called monoecious, from the Greek words for one (mon) and house (oikos). And in yet other species, individual plants bear only pistillate or staminate flowers; these are plants are termed dioecious (two houses).

Polygamo-dioecious describes species in which an individual plant bears both pistillate and perfect flowers, or both staminate and perfect flowers. Acer rubrum is one example. And in case you’re wondering (as I did), if there’s a corresponding term polygamo-monoecious, the answer is yes. In these species, an individual plant can bear all three types of flowers: pistillate, staminate, and perfect.