At the end of February, technically still wintertime, I saw this carpet of white on the Cabin John Trail. It wasn’t spring beauties, and it wasn’t leftover snow, either. 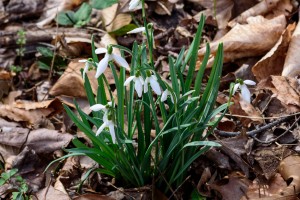 This is Galanthus nivalis (snowdrops; Amaryllidaceae), a perennial native to Europe. It naturalizes well, meaning you can plant a few dozen bulbs and enjoy the show year after year as they spread through your garden. Unfortunately, it naturalizes a little too well, and so can be found in woodlands throughout the mid-Atlantic, as well as some other parts of the country.  The National Park Service doesn’t list the species in its manual Plant Invaders of Mid-Atlantic Natural Areas, but the University of Maryland Cooperative Extension considers it invasive.

What exactly does it mean to be “invasive”? I like the USDA Forest Service definition:

An “invasive species” is defined as a species that is

Whether or not snowdrops cause environmental harm may be just a matter of degree, or time.

I didn’t know that snowdrops were a problem before researching them for this post. Now there’s another item on my garden to-do list: pull out the snowdrops.

When it comes to Vinca minor (periwinkle; Apocynaceae), though, there’s no doubt. At least twenty-two authorities consider it invasive. It’s easy to find at this time of year. If you follow some of the footpaths near Carderock to the base of the climbing wall, you’ll find vast slopes of the stuff, competing with the Dutchman’s breeches, squirrel corn, Virginia bluebells, and trout lilies that belong there. The plant roots easily at the stem nodes, and since the long stems trail along the ground, it spreads quickly. This characteristic, along with evergreen leaves, pretty purple flowers, and tolerance for a variety of growing conditions, makes it a popular groundcover in home gardens. Please don’t plant it.