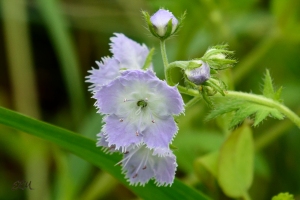 Three of the approximately 170 North American Phacelia species can be found in Maryland: Coville’s phacelia, small-flowered phacelia (P. dubia), and Miami mist, aka fringed phacelia or purple scorpion-weed (P. purshii). The second and third of these are both classified S3/watchlist:

Vulnerable/Watchlist—At moderate risk of extinction or extirpation due to a fairly restricted range, relatively few populations or occurrences, recent and widespread declines, threats, or other factors. Typically occurring in 21-80 populations.*

P. purshii is found in Prince Geroge’s, Montgomery, Frederick, Washington, and Garret counties. P dubia has a simliar but smaller range. I haven’t seen this species myself yet, but am always watching for it at this time of year. 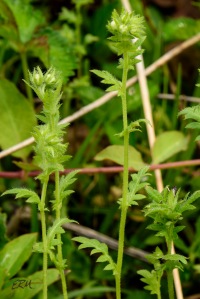 P. purshii, though, I see every year, along the Billy Goat B and C trails. There are a few populations in other areas east of the Appalachians, but for the most part this species is found in the Ohio River basin.

Like Coville’s phacelia, Miami mist is an annual, though it gets a little taller (maybe as tall as a foot and a half). The flowers are fairly small, but markedly larger than those of Coville’s phacelia. It has typical Phacelia traits: hairy leaves, hairy stem, hairy calyces. The five-lobed flowers are borne in a helicoid cyme, though the shape isn’t as pronounced as in some of the western Hydrophylloideae species (pictured here). 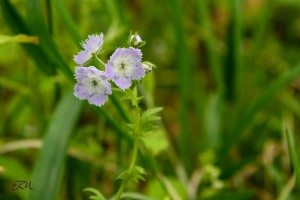 11 thoughts on “One More Phacelia”