It was an overcast day, and I was working at my volunteer job downtown when I realized that rain was likely soon, and could continue for the next several days, and if I waited too long I’d miss seeing small flower phacelia blooming. Quel horreur! since this was a “new to me” species.

So I packed up, drove out to Old Anglers Inn, and hiked quickly through occasional light drizzle to the place where fellow muddy-kneed photographer and wildflower enthusiast LW directed me. (See comments in One More Phacelia for location.) 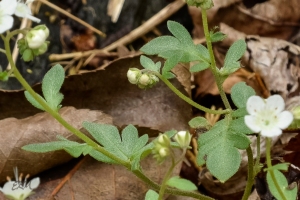 Like P. purshii, P. dubia is listed as S3/watchlist in Maryland. The two species are much alike, about the same height, flowers about the same size. Based on a one-time only observation in this large patch of plants, I’d say the cauline leaves of P. dubia are a little smaller, with fewer lobes, and mostly sessile rather than almost clasping as in P. purshii; also there seem to be fewer of them.

Most of the flowers in this patch were white, though some of them had a blue-ish cast and a few were an outright light lavender. But color is seldom diagnostic. The obvious difference between small-flower and fringed phacelia is the fringed petals on the latter species. In small-flower phacelia, the petal margins are entire.

Thanks for the tip, LW!

1 thought on “Yet Another Phacelia. Last One For Awhile. Really.”