Up near the Carderock climbing wall there’s a little rocky meadow area that has a delightful variety of wildflowers, usually starting about mid April with wild pinks and azure bluets.

Although the colors range from white through pale pink to bright, dark pink, wild pink (Silene caroliniana ssp. pensylvanica, Caryophyllaceae) is not named for the color, but for the shape of the petals (as if they been cut with pinking shears). Another common name for it is sticky catchfly.

This is a clump-forming semi-evergreen perennial that only grows about a foot tall at the most. It prefers dry to moist well-drained soils in rocky areas, with a bit of shade. It makes a great addition to the rock garden if these conditions are met, but in my garden the rabbits keep sampling it, so I have to use repellent. I don’t think the little beasts favor it, but when competition for food is high, wild pinks are vulnerable.

This subspecies of S. caroliniana is found mostly in the mid-Atlantic states and southern New England, with a few pockets in Ohio, Kentucky, Tennessee, and North Carolina. In Maryland look for it in the ridge and valley, Blue Ridge, and piedmont physiographic provinces, and parts of the coastal plain.

There are two other subspecies of wild pink. S. caroliniana ssp. caroliniana occurs mostly in South Carolina and surrounding areas, while subspecies wherryi is more Midwestern. S. caroliniana (subspecies not specified) is endangered in Florida, threatened in Ohio and Tennessee, and exploitably vulnerable in New York

Azure bluets (Houstonia caerulea, Rubiaceae) is one of four bluet species found in the Maryland piedmont, and can be found in most of the rest of the state, too (it’s missing from a few coastal plain areas). It’s widespread from Maine to Alabama and a few parts of the midwest. 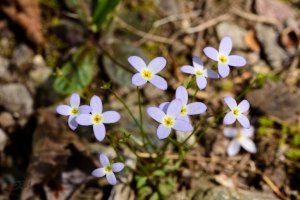 This is a very small plant, consisting of a basal rosette of leaves and a few threadlike stems only a few inches tall, with a flower atop each. The flowers are usually light blue with a yellow throat, though they can range from almost white to moderate lavender blue. Since there can be many stems per plant and it grows en masse, it can be quite eye-catching. Other common names include little bluet, innocence, and Quaker ladies. 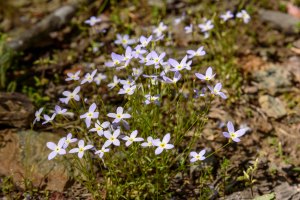 I have to admit, this is one of my absolute favorites. I have spent literally hours photographing azure bluets, every spring for the last few years. I can’t get enough of them.

See in the top photo the third type of flower, somewhat taller than the others? More on that next time.