Reviled by gardeners, yellow woodsorrel seems to show up everywhere. I’m not sure I’ve ever purchased a gallon-size or larger plant of any sort from a nursery that didn’t have the darned thing tagging along.

I’ve never bothered to key out a sample (maybe I will soon, when it isn’t raining; it won’t be hard to find), but the little plants that some people mistake for some sort of yellow clover are likely Oxalis stricta or O. corniculata, both of which are listed as weedy or invasive by several authorities. Oxalis species have leaves that resemble clover’s, with three heart-shaped leaflets, but clover is in the Fabaceae while Oxalis is in its own family, Oxalidaceae. 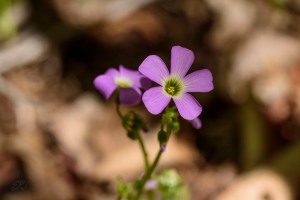 But this post isn’t about the weeds. It’s about two other woodsorrels, both with lovely flowers. Both form colonies from runners along the ground, but they aren’t weedy. If I found these in my garden, I wouldn’t pull them out. 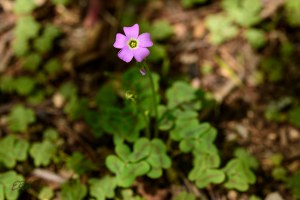 The purple flower photobombing the first picture in yesterday’s post is Oxalis violacea, violet woodsorrel. It’s a perennial forb found from the Great Plains east to the Atlantic, as far north as Vermont and south into Florida. It’s listed as endangered in Massachusetts and Rhode Island, threatened in Michigan and New York, and special concern in Connecticut. The leaves are typical for this genus except for the purple markings, which may be very faint but at this time of year are usually quite distinct. Like many oxalis species, the leaflets fold together when there is little light (including overcast days). The flowers are about half an inch wide. 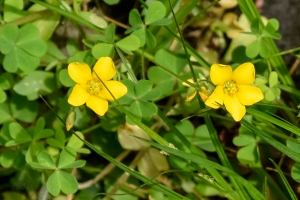 The flowers of the other species, Oxalis grandis (great wood sorrel), can get even larger, up to an inch across. Note the orange-red markings in the throat (click on the picture for a larger view). There are several species with this characteristic, but none of them are found in Maryland, making this an easy plant to identify when found here. This species is somewhat more upright than other Oxalis species. 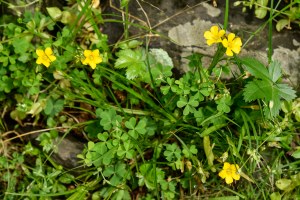 Great yellow woodsorrel has a much smaller range than violet woodsorrel: it’s found from Pennsylvania south to Alabama and west to the Mississippi River.

See the larger, deeply lobed and serrated leaves in this picture? They belong to a different yellow flower. More on that, and a closely related alien, next time. 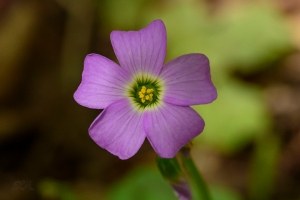