It tickles me that a bedrock terrace can maintain a pond, providing habitat for so many wetland plants. Only a few dozen feet away from that pond grow plants like big bluestem grass, that prefer much drier habitats.

And in between, there are low-growing swaths of fogfruit.

I’m not sure if technically fogfruit is a mudflat ephemeral, but the plants don’t seem to appear until river level drops, and then they pop up from the muddy shores, the rhizomes forming large mats of vegetation that stand about 12 to 18 inches tall. 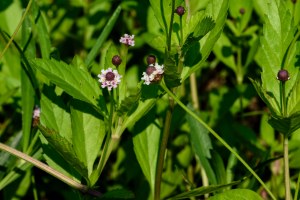 Phyla lanceolata (formerly Lippia lanceolata) is in the Verbenaceae, a family of about 1,000 species in about 30 genera. Plants in this family can be found worldwide, but most of the species are tropical; P. lanceolata is one of the more northerly occurring ones. There are about a dozen species of Phyla, maybe half of which are native to North America. This one is found in much of the US, excepting New England, the northern Great Plains, and the Pacific Northwest. Populations seem to be concentrated in the Mid-West and along the Mississippi River corridor. It’s endangered in New Jersey and rare in Pennsylvania, and the only species of Phyla found in Maryland.

The inflorescence of fogfruit is fairly typical of plants in the Verbenaceae, the individual flowers clustered together in a tight spike. (It looks to me a lot like lantana, a common garden plant.) The individual flowers have five petals, fused together into a tube with irregularly spreading lobes. Many but not all of the flower clusters I’ve seen have this wonderful arrangement: yellow-throated flowers alternating with mauve-throated flowers.

About that common name… to some it’s “fogfruit”, to others it’s “frogfruit”. Wondering if the latter was a mispronunciation of the former, I was all set to do some real book research, but looked first on the internet, where I found, unsurprisingly, that it’s already been done:

In the end though, frogfruit with its alliterative cadence may simply be easier to say than fogfruit…